*Benefits are subject to availability and are offered once per stay. 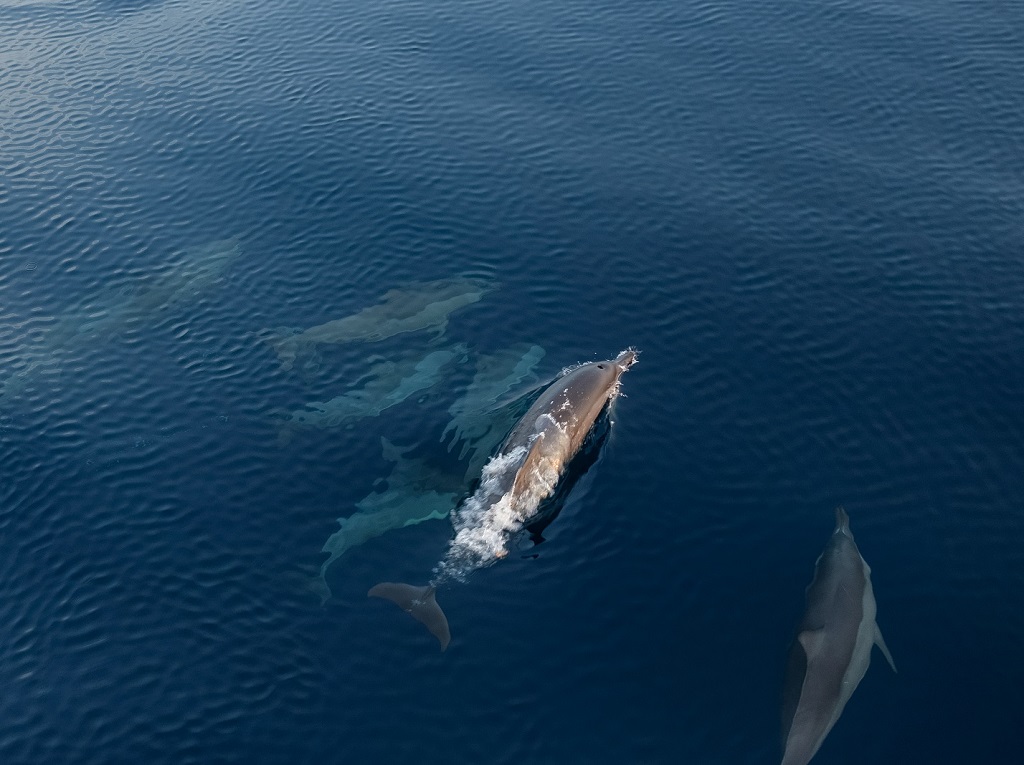 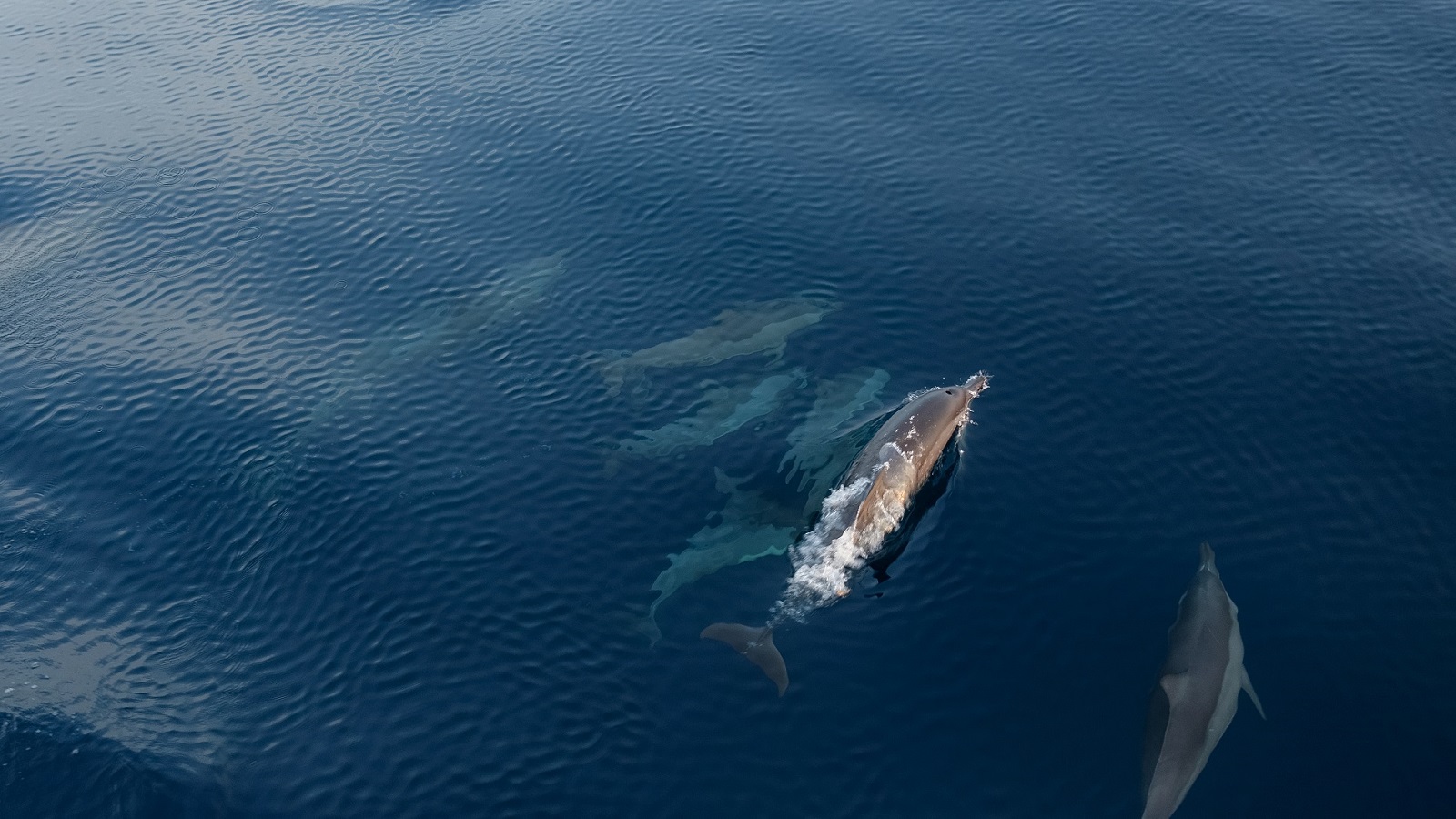 Join a dolphin discovery excursion from Amilla Maldives Resort
and see wild dolphins in the Maldives.

Wild dolphins are frequently spotted playing and hunting in the crystal clear waters of our Baa Atoll UNESCO World Biosphere Reserve. And the very best time to spot these beautiful creatures is at sunset.

Our sunset dolphin excursions depart several times a week. We offer scheduled shared excursions as per our Baa-lletin activity programme, or you can schedule a private excursion at your convenience, with a variety of vessels to choose from. Over the course of one and a half hours, this Maldives sunset cruise will take you out on the turquoise ocean to observe wild dolphins playing and feeding as they migrate across the atoll.

Dolphins in the Maldives are always wild - we do not have any aquariums - so this is an ethical, authentic and truly exhilarating experience. Being wild animals, and we are lucky enough to see them around 80% of the time.  We always respect these beautiful creatures and strive to ensure they never feel uncomfortable or threatened. They seem to enjoy the sounds of delight from our guests on board the boat and often spontaneously play in the waves created by it.

What to expect from dolphin excursions? 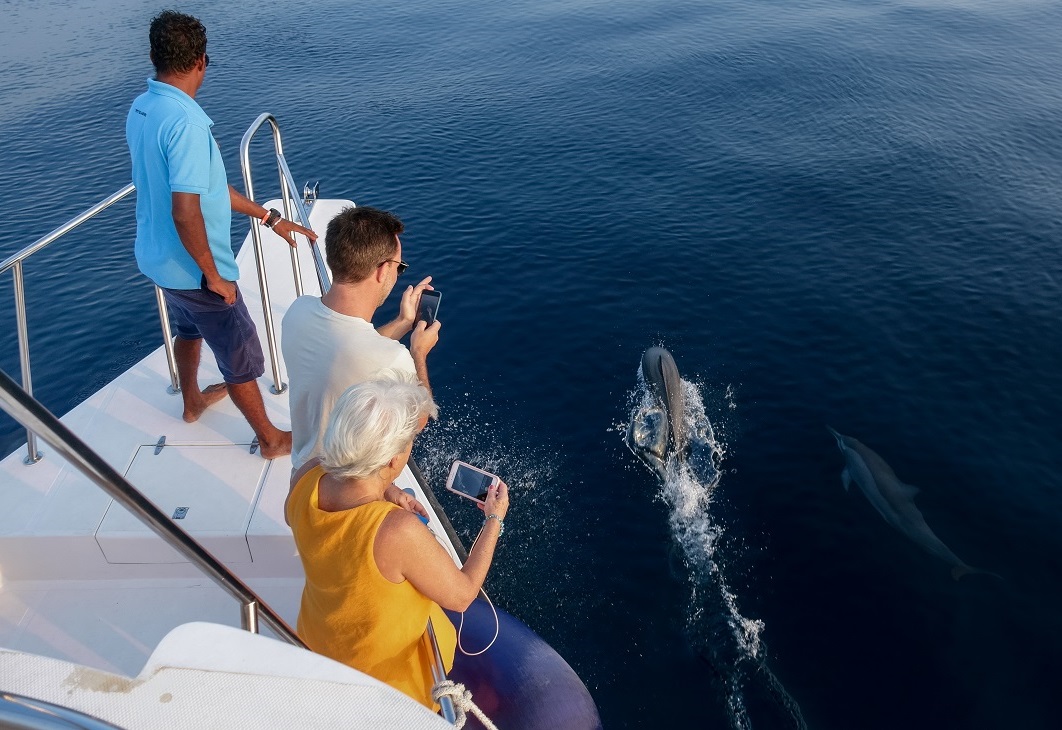 What to expect from dolphin excursions?

During a wild dolphin encounter, they may swim next to the boat's bow and jump and spin out of the water adjacent to it. They are very curious and playful creatures. Sometimes they ‘spy hop’, which is when they angle their body vertically and bob their head out of the water to see what’s happening above the waves.

Dolphins are found all year round in Baa Atoll, although its’ easier to spot them when the sea is calm. The very best time of year to see them is during high season (November to March). As they are indeed wild creatures, we cannot always guarantee a sighting, but the crew will do their best to take you to their usual haunts.

To add to the magical experience of spotting these amazing mammals at sunset, sparkling wine and canapes are served during the excursion.

Dolphins in the Maldives

Dolphins in the Maldives

Dolphins usually travel into Baa Atoll during the day to rest and find safety for their pod. During the night, they leave the atoll to feed, which is why sunset is the perfect time to see dolphins in the Maldives.

There are 20 species of dolphins in the Maldives, but the most common species are Spinner Dolphins and Indo-Pacific Bottlenose Dolphins. Of these two species, Spinner Dolphins are spotted the most often during Amilla’s dolphin cruises.

Spinner Dolphins are smaller than Bottlenose Dolphins and tend to be found in larger pods. These wild dolphins love to put on a show, spinning and jumping out of the water (hence their name). It’s believed they do this for communication and to potentially remove any parasites or remoras, but it also seems as though they enjoy it, too.

Bottlenose dolphins are larger and darker in colour than Spinner Dolphins, and they have a thicker ‘rostrum’ (snout). They are typically seen in smaller pods, and do not tend to put on the dramatic displays that the Spinner Dolphins do.

We sometimes also see Short Finned Pilot Whales on our Maldives sunset cruises. They are very dark blue, and do not have a rostrum like the dolphins - instead, their heads are bulbous. Their dorsal fins are smaller than a dolphin’s, and their back is not as smooth nor as streamlined. In Baa Atoll, they are found in small pods.

How to behave around dolphins 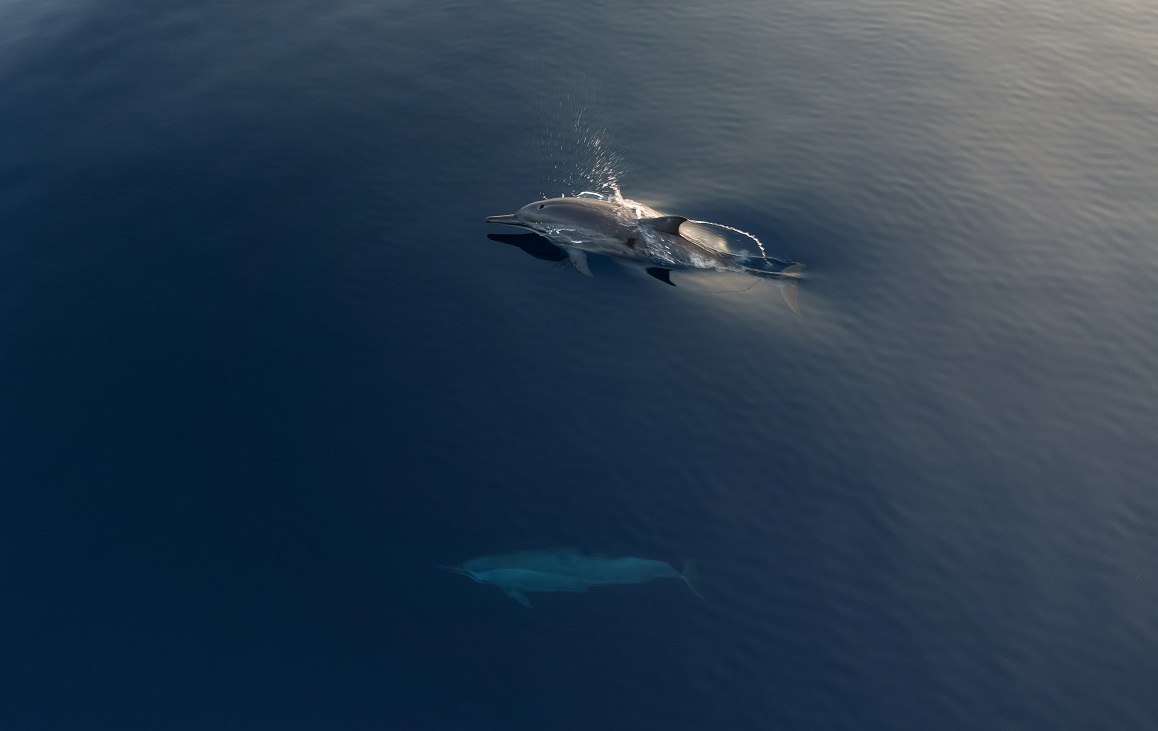 How to behave around dolphins

We promote a happy and safe environment for marine life in Baa Atoll for the sake of their well-being and conservation, and that so you can carry on witnessing these amazing creatures in our waters for generations to come. Therefore, we believe the best way to experience dolphins in the Maldives is from a boat. This ensures the safety of our guests as well as the protection of the dolphins. They normally naturally choose to come very close to the boat and play in its wake and around the boat.

While you’re on board, you may find they respond well to whistling, and it often encourages them to come closer and play. You must stay on board throughout the entire dolphin excursion for your safety and for the well-being of the dolphins.

While swimming with dolphins may seem exciting, often dolphins swim in very deep water where currents can be strong and predators could be following them. They can also move very quickly, so once you were in the water, the dolphins would be too far away to see and it’s impossible to catch up with them. Jumping in the water with them can also frighten them away, cause them distress or interrupt their normal behaviour. There may also be infant dolphins in the pod, which means the mothers will be extra protective and could be aggressive.

For these reasons, we do not allow guests to swim with dolphins but instead offer this incredible Maldives sunset dolphin cruise as an ethical, genuine and unforgettable experience.